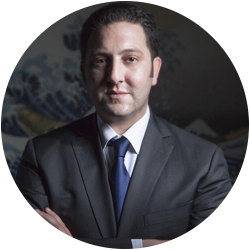 As an industry-recognized authority on social media and internet marketing in general, Aaron Schoenberger has extensive experience guiding businesses ranging from billion-dollar celebrity brands to Fortune 100 companies. He serves as the Founder, CEO and lead investor of Soteria Intelligence.

Mr. Schoenberger created Soteria Intelligence in 2013 after launching one of the first social media consulting firms in the mid 2000s where he quickly recognized the need for improved social media analytics capabilities that go above and beyond looking at simple combinations of keywords or spikes in traffic.

Through his research early on, Mr. Schoenberger realized the potential of machine learning, specifically natural language processing and image recognition, and began testing theories in 2012 before Soteria Intelligence officially came to life. His focus was on using machine learning to first understand certain problems then use trained models to look at what’s actually being said in conversations as opposed to what lies on the surface (the approach taken by tools of the past). Shortly thereafter, Soteria Intelligence executed on its mission.

Mr. Schoenberger is viewed as a thought leader and has been quoted in a variety of publications over the years, including college textbooks. He was asked to speak at the first-ever CBS social media conference, Social: The New Media, as well as other events. Mr. Schoenberger has also been featured on national television and has participated in webinars, including one on social media analytics for PostRank, which was acquired by Google and rolled into Google Analytics soon after. He also serves as an expert witness in federal court cases related to social media.

Since Soteria Intelligence launched, Mr. Schoenberger has been featured on the BBC and NPR, quoted in various publications, and highlighted in a cover story by The Guardian.