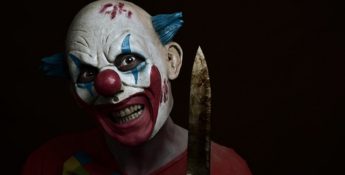 In the past few months the world has been taken over by creepy clowns trying to scare people for fun, threaten them, and even cause harm. What began as a group of small incidents and subsequent copy cats has spiraled into a worldwide craze where creepy, scary clowns are securing news headlines from Los Angeles, California to Zurich, Switzerland.

The reason this problem has become so serious, like many others in the past, is the use of social media to spread the word, wreak havoc, and garner the attention of journalists. Additionally, similar to school shootings where attackers want to “one up” previous kill counts or threats against airlines intended to disrupt operations after previous incidents showed such will happen, scary clown threats have been perpetuated by social media itself.

For example, as clowns started to go viral many of the top YouTube prank channels and vloggers released videos related to clowns. Basically, small incidents caught fire and went all the way up the chain to key influencers, who then posted videos that have already received millions of views. It’s a crazy world we live in.

With Halloween quickly approaching, law enforcement will have their hands full with the already present clown-related issues as well as those attempting to use Halloween to act out even more.

For corporations worried about how scares can potentially impact their organizations, it’s important to filter through the white noise and not group people by what they look like (e.g. clown) but instead by behaviors themselves.

Whether we’re looking at online threats or other types of threats, we can all agree that threats of harm are unacceptable, however someone being a clown, Power Ranger, protestor, etc. in no way indicates any wrongdoing. Don’t focus on the surface, but instead what lies beneath.